The saga of the church doors 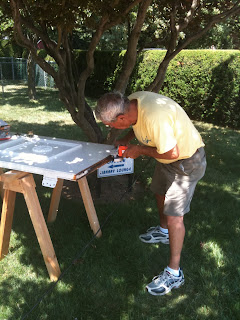 Don Neugebauer came by on Tuesday planning to throw a little Rustoleum on the bottom of the church's front doors in preparation for repainting. He took the door down, flipped it up so he could see the bottom, and found the door's bottom partially rusted away. Luckily Don had just brought an angle grinder and our across the street neighbor was throwing away a bunch of treated two-by-fours. A few hours, and several trips home and to the hardware store later, the door had a new bottom.

Earlier Don had noticed that the threshold of the door was not well fastened down. On Wednesday, Don came back, pulled up the threshold and found nothing. The entire floor under the right side of the threshold had rotted away. Don went home.

On Thursday Don returned. The second door came down and received a new bottom. The threshold came back up, and the full extent of the rot accessed. Don pulled up the carpet and cut away 30" into the narthex, pulling up rotted floor boards and laying down treated plywood. He replaced the threshold, hung the second door and went home. Someone else can buy some tile.

A huge thanks to Don, as well as to Bill who lent support.
Posted by pastorfritz at 1:25 PM

Pastor Fritz is too modest. Both days I worked on the doors Pastor was in the office and then spent almost as much time as I on the doors, when doing a project like this a second pair of hands and someone to bounce ideas off is invaluable, not to mention the tools he had to save me trips home.
Thank Fritz