During Lent this year, Pastor Fritz is preaching a sermon series entitled "God's Bail out Plan." Below are excerpts from the third sermon in the series, which draws lessons from the Israelites' enslavement in Egypt and God's rescue.

In Egypt the Israelites became victims of a paranoid, xenophobic ruler who needed slaves to complete his numerous building projects. By working them to death, the king – possibly Ramses II – would prevent them from siding with Egypt’s enemies during times of conflict.

When I think of this world, I often think of a giant pinball machine with billions of tiny balls representing all of us humans. Ideally the balls should dance in intricately beautiful choreographed patterns. But inevitably somebody misses a step or drops out of line. Chaos ensues.

Sins big and little pervade our lives and pervade our world. We live among corrupt and broken systems operated by corrupt and broken people. We, our neighbors, our world suffer as a result. The Apostle Paul talks about the entire world, all of creation, groaning under the weight of sins large and small, innocent and diabolical. It is this sin that causes a cashier at Target or an engineer on the Long Island Rail Road to loose her job because a person who wanted a little more house than they could afford was seduced by a broker seeking a larger commission from a mortgage company seeking bigger profits, who was invested in by a bank trying to get in on the action which in turn was insured by AIG. Pinballs out of step, out of line. Broken choreography bringing pain, suffering and hurt into our lives and into our world.

Posted by pastorfritz at 7:41 AM No comments: Links to this post

New Ways of Being Church

Just got back from spending three days in Louisville, KY at a conference focused on New Ways of Being Church. Featured speakers were: Diana Butler Bass, Marcus Borg and Brian McLaren. Earlier posts contain some soundbites from their presentations.

All the speakers seem to agree upon two points which have major repercussions for faith communities. Personally, I find both exciting. But others find them quite disturbing and even frightening. If Butler Bass, Borg & McLaren are correct, it means that to be effective (or even survive) congregations have to do church a whole new way.

Point 1:
Our "Christian culture" has shifted to a "secular" or "pluralistic" culture, meaning that many people attend church out of an intentional desire to follow Christ rather than because church attendance is expected.

Point 2:
Spiritual focus needs to shift from the suffering and death of Jesus for an individual's sins to Jesus' declaration of the coming of the Kingdom of God.

All the speakers agreed on this, and this is their most controversal claim. For the last 1500 years, Christianity's focus has primarily been other worldly: We follow Christ to avoid hell and get into heaven. The primary goal of the church is to get more people into heaven and help everyone avoid hell. Believing in the right things became more important than doing the right things.

The speakers called for a new reformation based on practice not belief, focused on following Jesus in this world as opposed to following him to the next world. They envisioned a Christian community steeped in prayer and worship, committed to social justice and peace, defined by hospitality and who take as their foundational commandment to love God and love neighbor.
Posted by pastorfritz at 9:08 AM No comments: Links to this post

This is the third installment in my series of notes from the recent conference I attended at Louisville Seminary on New Ways of Being Church. These are from the lecture and discussion given by Brian McLaren, and really consists mostly of sound bites that jumped out at me. This is the longest entry, in part because I consider Rev. McLaren one of the most innovative and far sighted thinkers in the church today. For a fuller idea of what he thinks, read his books, especially Everything Must Change and A Generous Orthodoxy .

Humanity is in the midst of a change as big as any in history. A whole new society is emerging, that we do not yet know what is. Reacting to this change is about more than changing music or adding programs.

The big shift:
The new vision of what church is comes from those new to the faith and the young.


An old interpretation of how the Gospel helps us relate to the world: 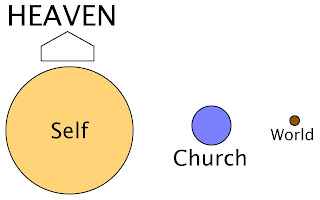 A new interpretation of how the Gospel helps us relate to the world: 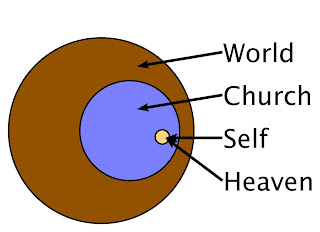 How do churches relate to each other?

Three new ways of being church:

Posted by pastorfritz at 8:34 PM No comments: Links to this post

This is the second set of notes from the recent conference I attended at Louisville Seminary on New Ways of Being Church. These are from the lecture and discussion given by Marcus Borg, and really consists mostly of sound bites that jumped out at me. You will note that this is a very short entry. Frankly, I was not very impressed with Dr. Borg's thinking. For a fuller idea of what he thinks you can read any one of his kajillion books, although almost all discuss his pursuit of an "authentic uncorrupted gospel" and not his ideas on new ways of being church - of which he apparently has very few. The below ideas were mostly borrowed from others, but seemed to have some use and possibly some merit.

Posted by pastorfritz at 8:28 PM No comments: Links to this post

This is the beginning of my notes from the recent conference I attended at Louisville Seminary on New Ways of Being Church. These are from the lecture and discussion given by Diana Butler Bass, and really consists mostly of sound bites that jumped out at me. For a fuller idea of what she thinks, read her books, especially Christianity for the Rest of Us.

Church needs to shift from defining what we’re not to defining what we are.
A new definition of church for the 21st century:
Christian communities who practice a generative, birthing faith that seeks primarily to create new opportunities for the transformation and healing of individuals and society.

Diana’s study of successful congregations revealed that by intentionally engaging Christian practice congregations:
Rick Warren: “We are in the midst of a new reformation – a reformation about deeds, not creeds.”
Posted by pastorfritz at 8:17 PM No comments: Links to this post

New Ways of Being Church

I'm Louisville, KY for a few days attending the annual Festival of Theology at Louisville Presbyterian Theological Seminary. Its not much of a festival - no jugglers, cotton candy, cool bands, dance troupes or any of the things that make a festival, well, festive. It is a time of hearing lectures by and having discussion with three of the most innovative minds working in the church today:

Diana Butler Bass - a church historian who calls for a refocus on basic spiritual practices (hospitality, sabbath keeping, tithing, simplicity, etc) in congregational life.
Marcus Borg - a New Testament scholar who feels an intense analysis of scripture can separate a radical "true gospel" from a later "socially accomodating" gospel and by focusing on this more radical gospel, the church can find renewed purpose and identity.
Brian McLaren - a pastor who feels that congregations should focus not on what they believe but instead on how they live out the life of Jesus as the community of Christ in this world.

As I have time over today and tomorrow I'll be summarizing their ideas and the discussion that follows.
Posted by pastorfritz at 6:53 AM No comments: Links to this post

During Lent this year, Pastor Fritz is preaching a sermon series entitled God's Bailout Plan. Below are excerpts from the second sermon in the series.

We still build great towers as a testimony to human ingenuity, power, wealth and might. Al Qaeda targeted the World Trade Center on multiple occasions because the twin towers were, in many ways, a temple to the capitalist west and the wealth of the United States. When they fell, we felt emasculated. And the politicians rushed to promise that we would rebuild, bigger, better, higher, more secure. We would demonstrate our power and the supremacy of our economic belief system.

As bad as 9-11 was, imagine how bad it would have been if we had lost perspective on who our God really is. What if we had given superiority to the human made systems and philosophies, governments and multi-national corporations represented by those towers? Many years ago, our ancient ancestors made that mistake. They saw earthly power and confused it with divine power. They saw earthly wealth and confused it with divine blessing. They too built a tower to move the human into the realm of the divine. Luckily, in Abraham, God had a bail out plan.

Posted by pastorfritz at 8:48 PM No comments: Links to this post

During Lent this year, Pastor Fritz is preaching a sermon series entitled God's Bailout Plan. Below are excerpts from the first sermon in the series.

God had reached out from heaven in love and crafted the earth, filling it with beauty and goodness. Everything about the world gave life. Nothing gave death. Everything about the world gave joy. Nothing gave pain. God’s love infused everything. There was no hate. The second of two creation stories calls this world the Garden of Eden. Dante called it Paradise. When we glimpse this world in the course of our very ordinary, non paradise filled lives, we call it God sightings.

Our sin blocks our participation in paradise as effectively as a painted window blocks the sun. As God expelled Adam and Eve from Eden, our sin expels us from intimate relationship with the divine.

Their fall is a metaphor of our personal falls. Instead of bearing the fruit God desires of us, from the first moment from the womb we are like the pear tree, wanting to grow quickly and bask in the sun. God built these yearnings, doubts and desires into us. Not so that we can experience suffering, but so that we can freely and wholly commit ourselves to him.

Most people spend most of their lives in the litter and bombed out factories along the tracks. That’s not what God wants – it has never been what God wants – and time and time again God seeks to rescue his people from the mess of a world filled with sin.

Posted by pastorfritz at 4:48 PM No comments: Links to this post

Last fall during Mission Sunday we made a whole bunch of no-sew fleece blankets. Our goal to present them to women in the battered women's shelter proved easier said than done, but finally we were able to deliver the blankets to the Nassau County Coalition Against Domestic Violence, where they'll be used in the Coalitions Safe Home for Abused Families. Thanks to Gloria Braun and Nancy Stalb for arranging the delivery. 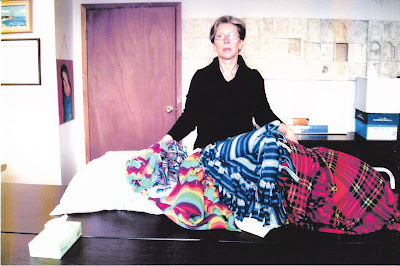 Posted by pastorfritz at 8:42 AM No comments: Links to this post

On Shrove Tuesday, as New Orleans went wild for Marti Gras, we had a much more sedate pancake supper at CPC followed by our annual burning of the palms. Many thanks to everyone who helped with the dinner and everyone who came to eat. A special thanks to Malverne Prime Meat for their donation of the sausage and a super special thanks to the Malverne Fire Department who stopped by to make sure we didn't burn down the church while we were burning the palms.

In addition to being a good dinner, the evening raised $550, which will be split between the Interfaith Nutrition Network and the CPC Youth Fund.

Posted by pastorfritz at 8:27 AM No comments: Links to this post