Bill Lee and his wife Judy loaded all of the Hygiene Kits made by the CPC Sunday School, Nassau Joint Youth Activities group and Allyce Yang's Cadet Troop - some 550 kits in all - and delivered them to the Church World Service distribution hub in New Windsor Maryland. Judy took some pictures.

View pictures of the Nassau Joint Youth gathering where some of the kits were assembled.

Posted by pastorfritz at 9:02 AM No comments:

When I first started praying with my colleagues at The Bowery Mission I noticed many of them using the phrase "hedge of protection," especially when lifting up a person or a program going through trying times - a client in danger of relapse, staff faced with unruly clients, etc. It was especially used in situations where the darkness of evil was a real and genuine threat. "God," they would pray, "please put a hedge of protection around so and so."

At first I was puzzled by the imagery and then came to use it myself. It is not biblical, although some link it to the cloud and the fire that God used to protect the Israelites from the Egyptians as they escaped from Egypt.

Hedge of protection language echos the fortress language of the psalmists and picked up by Martin Luther in his famous hymn. I see the hedge of protection as a mess of brambles between us and the evil of this world which threatens us and our faith. I take comfort in God's promise to protect me and keep me secure.

Posted by pastorfritz at 10:53 AM No comments:

The attached article referenced a leaked draft of a press release describing a yet-to-be finished statement regarding the Middle East that will be before the PC(USA) General Assembly this summer. According to the Wiesenthal Center, the finished document will contain extensive language threatening to the security of the state of Israel.

Nobody outside of the committee that is writing the statement seems to know what it will actually say, and the Wiesenthal Center has not posted a copy of the press release it claims to have received, so denominational leaders are struggling to understand where this complaint came from.

In response Gradye Parsons, Stated Clerk of the PC(USA) issued a statement reaffirming the PC(USA)'s historic and ongoing support of the state of Israel within secure borders, while also expressing the church's ongoing concern for the violence and human rights abuses by both parties in the Israeli/Palestinian conflict.

Here is my take, and what I would say to anyone who asked by opinion of this mater:
1. The PC(USA) has been one of the longest and staunchest defenders of the State of Israel and has long been a leader in Jewish/Christian relations. Statement after statement by the church has affirmed the right of Israel to exist. Presbyterian theologians, Bible scholars and preachers have been among the leaders in promoting a Christianity that combats, rather than supports, antisemitism.

2. The PC(USA) has very old, historic and close relationships with its sister churches in the Middle East including the Arab Christian communities in Israel, Gaza and the West Bank. PC(USA) peacemakers and missionaries are working in those churches and in Arab communities helping them prosper and promote peace within the context of the Israeli occupation. The PC(USA) desperately wants a secular, Palestinian state that co-exists with Israel because current policies by both Israel and Hamas are killing the Arab Christian church.

We are called as a church to stand with our sisters and brothers in Christ and to use whatever political power we have, and whatever power of presence our peacemakers and missionaries can provide, to ensure that they have the right to worship, the ability to pursue an education, build an economy, farm their land, raise their children in the faith.

The Presbyterian Church (USA) has long affirmed that support of the state of Israel and support of Arab Christians are not mutually exclusive. Others disagree. I do not.

Your thoughts? Leave a comment.
Posted by pastorfritz at 4:05 PM No comments:

Grafitti from the Pancake Supper 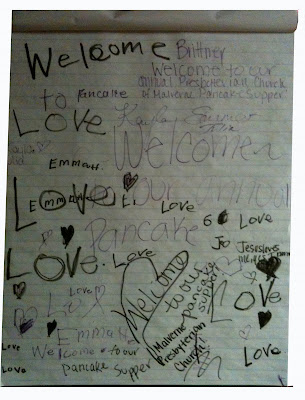 Posted by pastorfritz at 3:58 PM No comments: